Although they may be more about BBQ and family for most of us these days, still, Veterans’ Day and Memorial Day get a lot of attention. A lesser known day on the national calendar is Pearl Harbor Remembrance Day — not an official holiday, but an official day of observance. Yesterday was the 74th anniversary of the attack, and Fox News pulled together some photos and a few short stories of the survivors who gathered for the event yesterday, now all in their nineties. 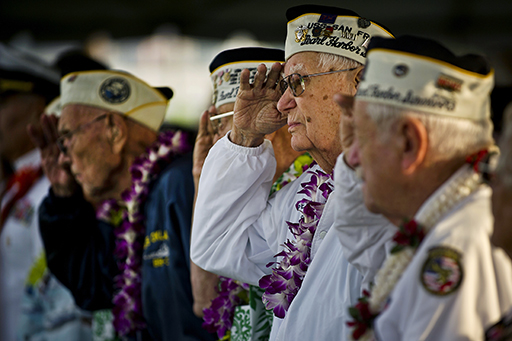 Pearl Harbor Survivor and World War II veteran Edgar Harrison salutes as the national anthem is played during a Dec. 7, 2012, remembrance ceremony marking the 71st anniversary of the attack on Pearl Harbor and the island of Oahu, at the World War II Valor in the Pacific National Monument, formerly known as the USS Arizona Memorial Visitor Center in Honolulu. On the morning of Dec. 7, 1941, a surprise attack by the Imperial Japanese Navy against U.S. Pacific Forces on the Hawaiian Islands thrust the United States in World War II. The attack lasted 110 minutes, from 7:55 a.m. until 9:45 a.m. A total of 2,335 U.S. servicemen were killed and 1,143 were wounded. (Department of Defense photo by U.S. Air Force Tech. Sgt. Michael R. Holzworth/Released)